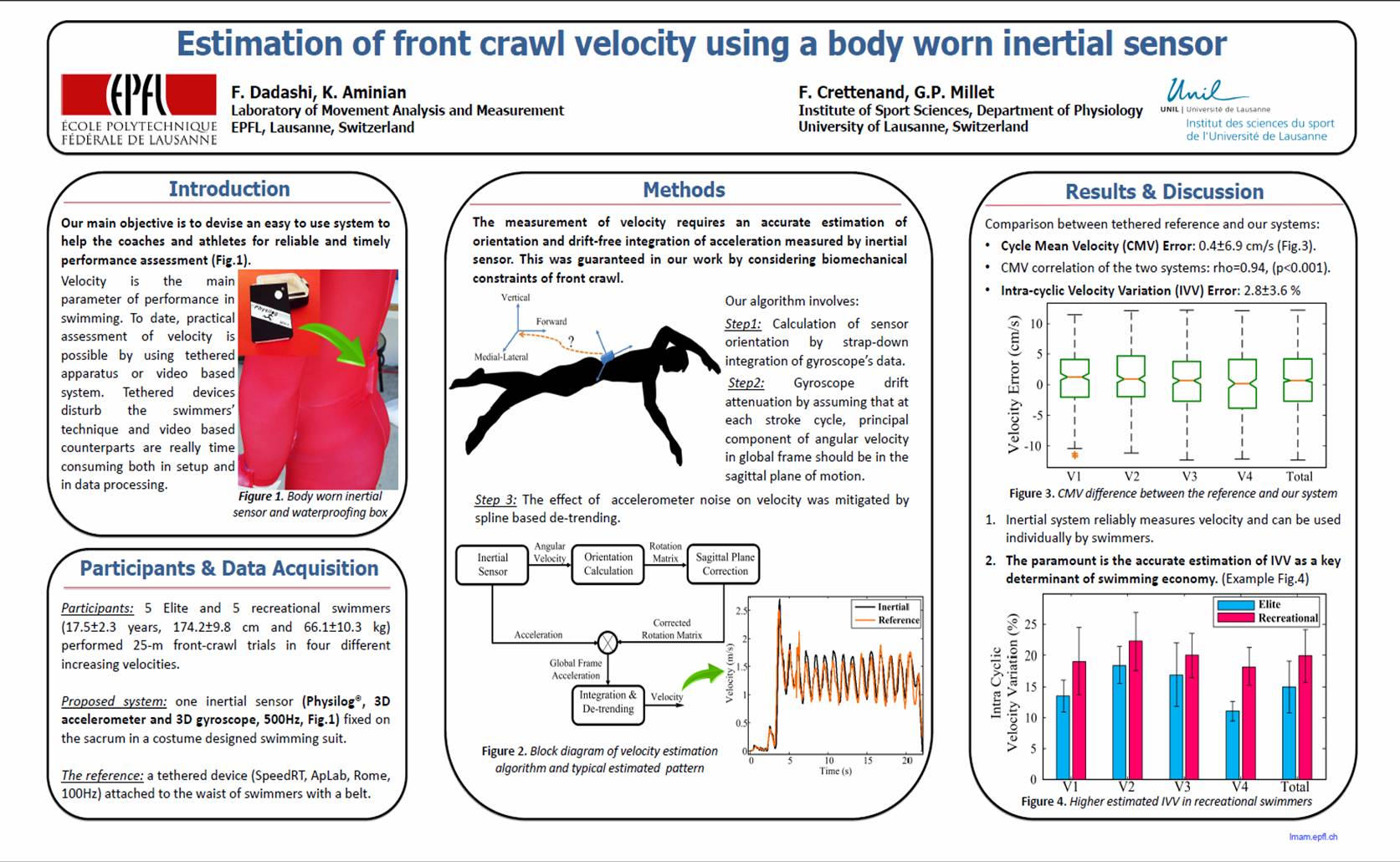 ABSTRACT:
Introduction Velocity is the main parameter of performance in swimming. To date, practical assessment of velocity is possible by using tethered apparatus that disturbs the swimmers’ technique and measures the velocity only in one direction. Our study aimed to design a new system to measure the swimming velocity in front-crawl, using a single light waterproofed body-worn inertial sensor. Methods 10 well-trained swimmers (17.5±2.3 yr., 174.2±9.8 cm and 66.1±10.3 kg) performed 25-m front-crawl trials in four different speeds, equipped with one inertial sensor (Physilog®, 3D accelerometer, 3D gyroscope, 500Hz) worn on the sacrum. A tethered device (SpeedRT, ApLab, Rome, 100Hz) was attached to the swimmers as reference. An accurate and drift-free integration of the acceleration measured by the inertial sensor was achieved by considering biomechanical constraints of front-crawl. First, sensor orientation was determined by strap-down integration of gyroscope’s data (Sabatini, 2005). The effect of drift was compensated by assuming that main angular velocity direction in body anatomical frame should be in sagittal plane of motion. Any deviation from this condition was considered to be the drift and removed. Finally the instantaneous velocity was calculated by integrating forward swimming acceleration. Results N=421 cycles were compared between the two systems and range of velocities was [0.91, 1.95] m/s. A significant correlation was observed between the two systems in measuring cycle average velocity (Spearman’s rho=0.94, p<0.001). The difference in cycle average velocity measured by the two systems was 0.4±6.9 cm.s-1. Concurrent validity of our method, assessed by normalized pair wise variability index (nPVI) (Sandnes & Jian, 2004), was 4.3%. Discussion No significant difference between the two systems confirms the accuracy of our speed assessment method. The nPVI value shows that the two systems have in average 4.3% difference in detection of average cycle velocity variation. Most of the difference can originate from the elasticity of the nylon cord of the reference system, especially during high transient accelerations and decelerations. A technical problem that hinders the comparison of instantaneous velocity is the synchronization of the two systems, while for cycle average velocity comparison an ordinal association of cycles is needed. The accurate measurement of cycle average velocity allows the determination of the inter-cycle velocity variability that is a key determinant of swimming economy. Further step can be towards modification of proposed method to make it applicable for other swimming stroke techniques. References Sabatini, A. M.(2005). Medical and Biological Engineering and Computing, 43(1), 94-101. Sandnes, F. E., & Jian, H. L.(2004). Mobile Human-Computer Interaction 2004, 25-37.